Many schools, offices, and workplaces all around the world are closed. Restaurants are take-out only and theaters and shops are completely closed. Most people are practicing social distancing and self-quarantine by staying home and cancelling gatherings.

My school is doing virtual, at-home instruction with assignments that only take a few hours to complete. With so much time on my hands, I made the goal to not spend it doing nothing. I have picked up activities such as baking, painting, and journalling. With so much time on our hands and no where to go, what better to do than read!

This list consists of what I consider the best books to read to escape real life and enter another fantastical world. So let’s dive right into my top ten quarantine reads:

This is the perfect immersive high fantasy. Set in a world where magic has disappeared, main character Zelie unexpectedly teams up with the princess whose father murdered Zelie’s mother and shattered her world. They traverse the country on a mission to bring magic back to life while being chased by the prince, who is on a mission to kill Zelie and end magic forever.

Magic, revenge, intrigue, drama, and romance; what more could you want? Children of Blood and Bone is the perfect book to read during this hard time. And it is also over 500 pages!

2. The Darkest Minds by Alexandra Bracken

This book may hit a little close to home, set in a world where a disease has killed most of the American children, those who survived are left with supernatural powers. Ruby is a teenager living in one of the biggest of the concentration camps designed to hold dangerously powered children. She is hiding a secret that could cost her life, and when someone discovers it, she jumps at the chance to escape. She teams up with other Psi, kids with powers, for an epic road trip searching for the one person that may be able to help them.

This book is one of my all time favorites! Kids with powers, an epic squad, and a plot to be uncovered. If any of this sounds good to you, absolutely pick this up. Also, this is part of a series of three books and a companion novel, all of which are released now and available for binging!

This is an urban fantasy world where a mystical race of half-angels guards humans from the evil demons that wish to take over our world. This is the perfect book to immerse yourself in if you find learning about a totally new world to be exhausting or boring, because this one is set in our world. If you are feeling overwhelmed about the sheer number of Shadowhunter books to be read, this is the perfect time to tackle as many as you can.

4. The Diviners by Libba Bray

Want to escape this century and its hardships? Read a book set 100 years ago about the mystical hardships of the 1920s. This series was recently completed so you know what that means, perfect for binging. This supernatural series is set in the 1920s and follows an extremely diverse cast of characters with special powers as they fight ghosts and other paranormal maladies.

I just finished book 3 out of 4 of this series and I am so excited to pick up the last book and finally finish this amazing series. I cannot wait to see how it ends!

Admittedly this series can get a little confusing with all of the characters to keep track of and multiple plot lines occurring all at the same time, but I promise if you stick with it it will all come together in the end. Also a warning for those of you who are a little squeamish, this book does get quite creepy and even a little gory at times so take caution with that. Regardless I absolutely recommend this series to anyone it is so amazing!

Fair warning before you jump into this series, it is seven books long. And it’s a rollercoaster. Throne of Glass is probably my all time favorite series. The first book starts with Celaena Sardothien, renowned assassin, being offered the deal of a lifetime. Her freedom, in exchange for her participation in a competition to be the King’s champion, granted she win of course. But when her competitors begin to die in gruesome, unexpected ways, Celaena must discover the cause before she is next.

And if that doesn’t sound amazing and intriguing, remember it is just the first book. This series changes so much from the first book to the last you will be captivated by every step of the journey.

6. A Court of Thorns and Roses

Want to experience the brilliance of Sarah J Maas’ writing but you aren’t ready to commit to the seven books of Throne of Glass? Good news, you can. This series is only three books long and is just as good. Disclaimer before I completely convince you to read these, they are new adult not young adult so keep that in mind before you pick them up. In a world where faeries live in a mysterious kingdom, humans live in fear of them and their power. Feyre lives in the woods near the wall that separates the human and faerie worlds, hunting for her and her family’s survival. But when she encounters a fearsome faerie in the woods and slays it, she is thrust into the very world she fears.

OK, I have to admit the first book is the worst in this series but if you don’t like it don’t give up! I didn’t either but this is still one of my favorite series. I promise it gets better.

If you haven’t read Harry Potter just turn off your computer or phone and go read it right now. If you have, then you know the comfort of the world of Harry Potter and the way Hogwarts feels like home. Harry Potter is absolutely my go-to comfort read. I am in the middle of a reread of this series myself (I’m reading The Order of the Phoenix, my favorite Harry Potter book).

If you don’t know, Harry Potter is about an ordinary boy who discovers he is a wizard. Thrown into a new world, he discovers new friends, magic, and enemies. I don’t even know what else to say just go read it.

8. To all the Boys I’ve Loved Before

These three books are some of the coziest, warmest books I know. Just reading about Lara Jean baking makes me crave dessert. And bonus the first two books have been made into amazing Netflix movies ready for a double feature!

This story is about a girl named Lara Jean who writes love letters whenever she has a crush. But one day, her letters get sent to all the guys she has ever loved. Including her sister’s boyfriend. Fake dating, baking, sisters, and Lara Jean’s impeccable fashion sense. What more could you want?

If you have ever wanted to be a princess, this series is for you. These are my go-to rereads when I’m feeling down. Royalty, love, and reality show-style drama this series has got it all.

America Singer is just your average girl until she is chosen for the Selection. She is thrown into a world of ball gowns and royalty and most of all, girls who would maim and kill for the crown. 25 girls were chosen from around the country to compete to capture the prince’s heart. The winner gets to marry him and become the future queen. America never wanted any of this, but she might find that life in the castle is not as awful as she first thought.

The Lunar Chronicles are a series of sci-fi fairy tale retellings. If that isn’t interesting enough to get you reading I don’t know what is. These books are full of OTP worthy ships, an actual space ship, action, intrigue, and space royalty.

The first book opens on Cinder, a cyborg, oppressed in this futuristic world. She makes a living as a mechanic, hiding her true identity. A deadly plague runs rampant, and cyborgs are being taken and tested for a cure. Cinder lives a careful existence, but everything turns upside down when the prince comes to her mechanic booth, asking for a fix for his robot.

So that’s it! That is my list of 10 books to read to pass the time while you are social distancing during this hard time. I hope they bring you an escape and entertainment!

2 thoughts on “Ten books to read during the Quarantine” 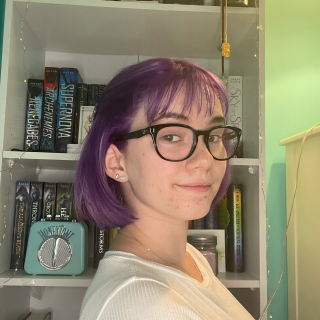